Saharias are primitive tribes that live in the north western part of Madhya Pradesh. This tribal community has presence in the regions of Guna, Gwalior, Morena, Shivpuri, Vidisha, Bhind and Raisen. They are also found in some parts of Rajasthan. The last census taken was in the year 1991 and the population of the community was found to be 3,32748 in the state of Madhya Pradesh. 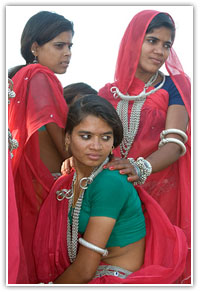 The Saharias mainly live in Guna and other regions of the state of Madhya Pradesh. They are said to be the sub-branch of the Bhils and they are considered to be a member of the Kolarian group. They are called “Raut” in the Guna-Shivpuri region. They are often addressed with respect as Khutia Patel. The Saharias claim that they are the younger brothers of the Bhils and hence they claim that they are the descendants of Valmiki and Shabari.

The mythological orgin of the Saharias is a moving narrative depicting how the the Saharias were the first progeny and now gradually living as a marginalized community. As per our mythology, God created air, water, flora and fauna on earth, but since there was nobody to enjoy this beautiful earth, he created man. He created the first human couple and placed them on the center of the earth. Then God got busy creating other human couples and the newly created human couples pushed the first human couple onto the margins. Then God called all the human couples and distributed implements like plough etc. The first couple got in last and got only a crowbar. They were complacent with what they had and went into the forests. In the forests, they dug roots and offered them to God. God wanted to tease them and so he made them pungent, but that did not deter them and they went in search of other roots. So God finally realized that his first progeny will be satisfied and content with what they get. That why this community of people are called Saharia meaning people with profound knowledge of medicinal plants and herbs who are satisfied and content in whatever little they have.

The houses of the Saharias are built in the shape of the English letter U on three sides and it is called Saharana.In the middle, there is a common courtyard for all the houses of the Saharias. The women folk use a paste of yellow clay, chalk and ochre and smear it on door frames, door sills, courtyard and the kitchen. As modernization has crept in, they buy colors from the market for this purpose. With these raw materials, they paint auspicious figures. 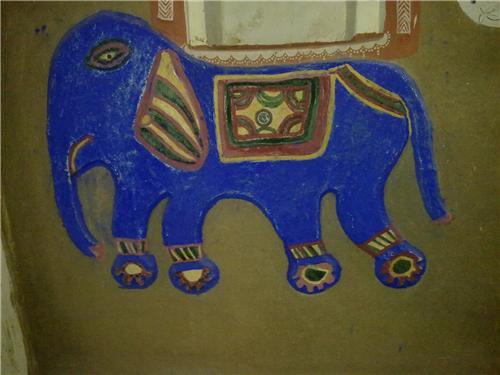 The painting is done on a regular basis almost daily in the kitchen and not confined to special occasions. They command great aesthetic sense in their paintings and they portray it in their daily routine activities. It is not very comprehensible for people like us who live in cities to appreciate the vision behind these paintings.

The Saharia men and women who live in Guna like and wear bright colors and they draw a lot of similarities from the clothing of the people in Rajasthan. The Saharias collect forest produces and engage themselves in agriculture. They eat rotis made of Jowar and bajra and eat roots found in the forest. In the event of a marriage, rotis of besan are made. Hunting and fishing are mostly liked by the Saharias. 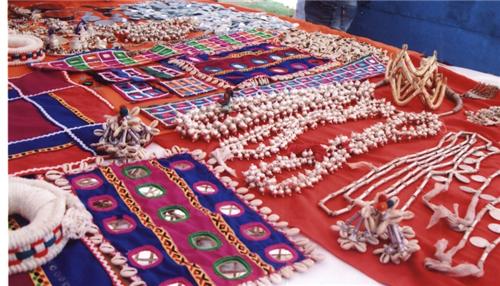 They have profound knowledge of medicinal plants and herbs. They are experts in obtaining honey from beehives. They collect wood from the forest and make baskets, broomsticks and ropes. As modernization has crept in, the Saharias have started worshiping Hindu Gods and Goddesses. They also celebrate different Hindu festivals. Their favorite Goddess is Sita Devi. They also worship Gram Devta like Dharti Ke Dev, Harimandev, Thakurdev, Bherudev, Nahardev, Karasdev, Darethdev, Bhumaia and Tejaji.The language of the Saharias is nearly extinct now and they have got accustomed to speaking the local language. Their songs truly depict their rituals , culture and tradition. The tradition of singing the drama song based on the life of Tejaji is done by the Saharias. Saharias have a special dance called Lahangi.

Explore more about Art and Culture of Guna