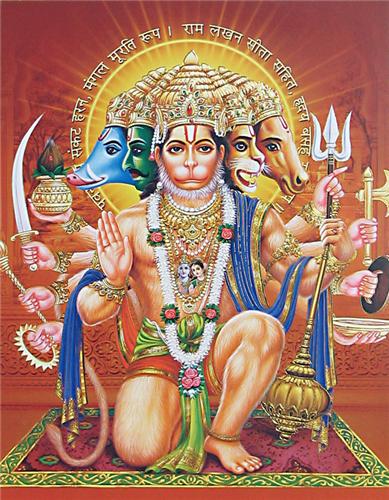 As the name suggests, Panchmukha is a Sanskrit word and the meaning of it is “five-faced”. Here in this ashram, Lord Hanuman is represented in five faces with various traits and characters. As we have read in mythology that Lord Hanuman has five strengths. The five strengths of Hanuman being Lord Hanuman’s main face, a boar known as Varaha, Hayagreev, lion, monkey and an eagle named Garud. This ashram is known for one of the five strengths of Lord Hanuman. One of the rarest forms of Lord Hanuman is the Panchamukha idol. It is noted that this idol is an amalgamation of the five avatars namely Lord Varaha, Lord Anjaneya, Lord Hayagreeva, Lord Garuda and Lord Narasimha, thus taking the form of five-headed Hanuman.
Hindus in large number throng this temple to engulf themselves in the silence and calmness of the ashram. In this world of fast paced life, one would like to spend their time in a serene and tranquil atmosphere to get rid of their stress and strain of everyday living.


Location of the Ashram

The Panchmukhi Hanuman Ashram is situated in Vivek Colony in the city of Guna, Madhya Pradesh. At the foot of the Guna-Gwalior railway line crossing by Guna-Ashoknagar road is the Panchmukhi Hanuman ashram located. Since Guna has a good network of transportation, the ashram can be reached from Guna railway station and bus stand easily as it is only 4 kilometers from them. The Guna aerodrome is just around 0.3 kilometers from the ashram. So the ashram which is a place of quietude can be reached by different modes of transportation sparing the devotee from the hardships of conveyance.


Other details of the Panchmukhi Ashram

The sculpting of the statue started in June of 2008 and the statue was unveiled in the year 2011. The ancient texts of the Hindus philosophize on the significance of the five strengths of Lord Hanuman which is present in the Panchmukhi Hanuman Ashram. Therefore, this ashram is a distinguished place of worship and frequented by the local people as well as from other states of India. The current successor of the ashram is Sri-Sri 1008 Siyaram-Das Ji Maharaj.